Washington, DC…More than 73% (2,297) of U.S. counties experienced natural decrease in 2021, up from 45.5% in 2019 and 55.5% in 2020, according to the U.S. Census Bureau’s Vintage 2021 estimates of population and components of change released today. Natural decrease occurs when there are more deaths than births in a population over a given time period.  In 2021, fewer births, an aging population and increased mortality – intensified by the COVID-19 pandemic–contributed to a rise in natural decrease. The statistics released today include population estimates and components of change for the nation’s 384 metropolitan statistical areas, 543 micropolitan statistical areas and 3,143 counties. 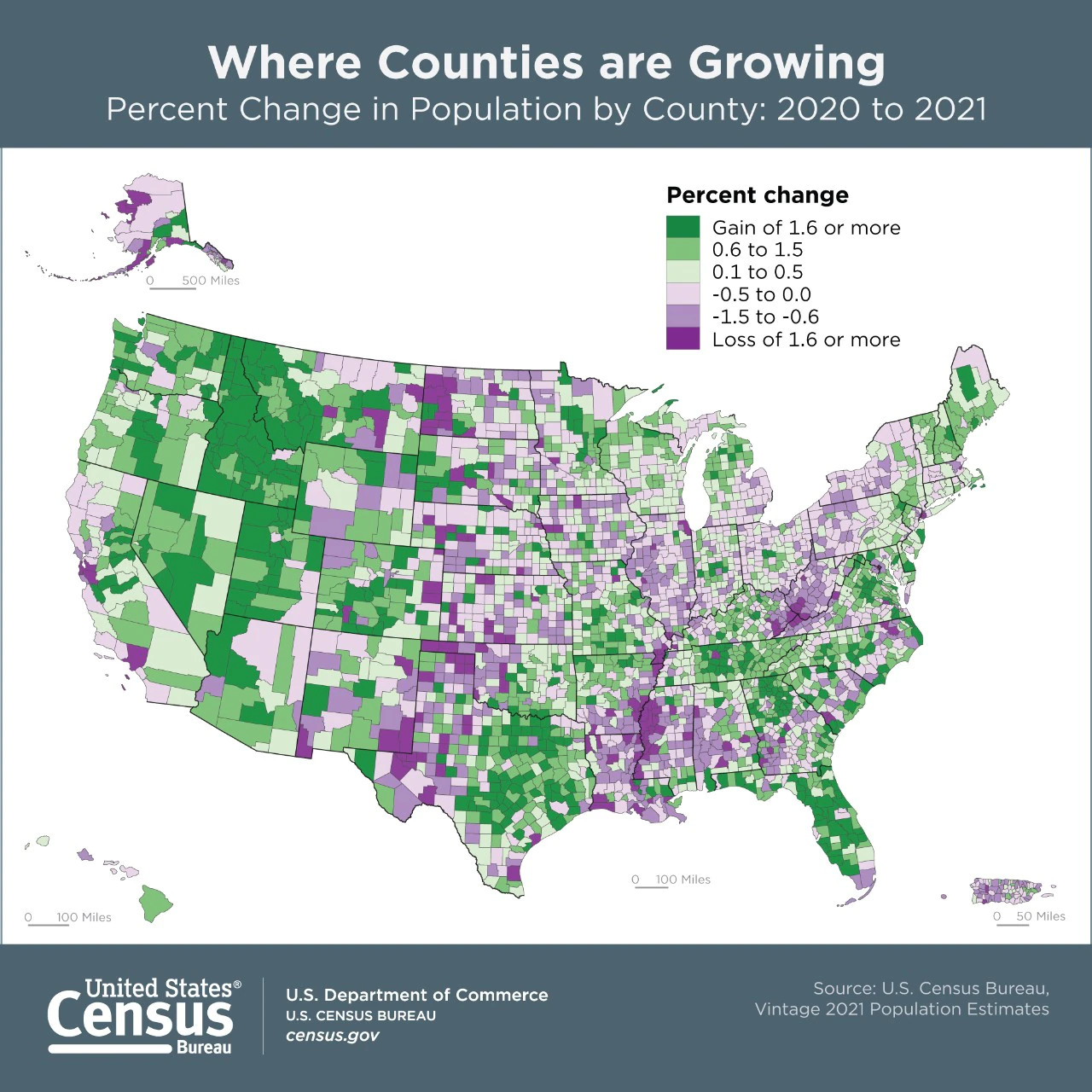 In 2021, all counties in Delaware, Maine, New Hampshire and Rhode Island experienced natural decrease. Some counties also experienced population declines attributable to migration. Counties with net international migration loss (more people moving out of than into the country), were most frequently found in California (41.4%), Oregon (27.8%) and Mississippi (23.2%). States with the highest percentages of counties with net domestic migration loss (people moving from one area to another within the United States) were Alaska (80.0%), Louisiana (71.9%) and Illinois (65.7%).

“The patterns we’ve observed in domestic migration shifted in 2021,” said Dr. Christine Hartley, assistant division chief for estimates and projections in the Census Bureau’s Population Division. “Even though over time we’ve seen a higher number of counties with natural decrease and net international migration continuing to decline, in the past year, the contribution of domestic migration counteracted these trends so there were actually more counties growing than losing population.”
In many cases, there was a shift from larger, more populous counties to medium and smaller ones. These patterns contributed to population increases in 1,822 counties (58.0%), while 1,313 (41.8%) lost residents, and eight (0.3%) saw no change in population.

The Population Estimates Program uses current data on births, deaths and migration to calculate population change since the most recent decennial census and produce a time series of estimates of population, demographic components of change and housing units. The annual time series of estimates begins with the most recent decennial census date and extends to the vintage year. This is the second release of population estimates data developed from a base population that integrates the 2020 Census, Vintage 2020 estimates, and 2020 Demographic Analysis estimates. Comparisons to previous years are not recommended.

With each new release of annual estimates, the entire time series of estimates is revised for all years back to the last census. All previously published estimates (i.e., old vintages) are superseded and archived on the <https://www2.census.gov/programs-surveys/popest/datasets/>.

More information on the timing of specific population and housing unit estimates products is available at <https://www.census.gov/programs-surveys/popest/about/schedule.html>. The Vintage 2020 methodology statement and release notes are available at <https://www.census.gov/programs-surveys/popest/technical-documentation/methodology.html>.

Over Two-Thirds of the Nation’s Counties Lost Population from Outbound Migration & Low Birthrate added by admin on March 25, 2022
View all posts by admin →